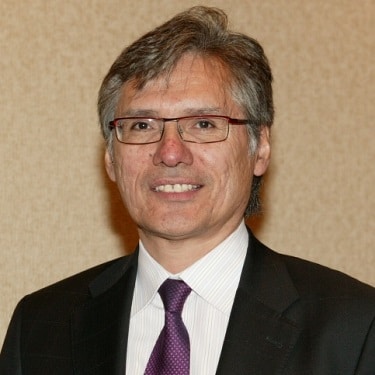 Dr. Matthew Coon Come is former Grand Chief of the Grand Council of the Crees (Eeyou Istchee) and former Chairperson of the Cree Regional Authority. Dr. Coon Come has held the position of Grand Chief/Chairman for 20 years. The Cree Nation of Eeyou Istchee is an Aboriginal Nation with a population of about 18,000 and traditional territory to the east of James Bay in Northern Québec, Canada.

Grand Chief Coon Come is a national and international indigenous leader and advocate for the aboriginal, treaty and other human rights of indigenous peoples in Canada and internationally. His election in July 2009 to the office of Grand Chief of the James Bay Cree Nation of Eeyou Istchee and Chairperson of the Cree Regional Authority is his sixth re-election to those positions.

Grand Chief Coon Come was first elected as Grand Chief of the Grand Council of the Crees and Chairman of the Cree Regional Authority in 1987, and served for five terms of office. He was former National Chief of the Assembly of First Nations, the national organization of First Nations in Canada, from 2000 to 2003. He became known throughout Canada for his efforts to end the federal policy of extinguishment of aboriginal peoples’ human rights of self determination.

In recognition of his leadership-marshalling “local, national and international environmental, human rights and tribal communities to create a strong coalition” to stop a massive hydro-electric project on his people’s land-Matthew Coon Come was awarded the Goldman prize, the “Nobel Prize of Environmental Awards” (1994).

In 1998, Trent University granted Grand Chief Coon Come the degree of “Doctor of Laws Honoris Causa” in recognition of the significance of his work, and in 2000, the University of Toronto also awarded him an honorary Doctor of Laws. In 2005, Dr. Coon Come was also granted a ‘Doctor of Divinity” from River Bible Institute. He also received the National Aboriginal Achievement Award in 1995.

Born in 1956 on his parent’s Mistissini Trapline, Grand Chief Coon Come was soon recognized by the elders as a natural leader. He was asked to be coordinator for all the inland Cree communities for the negotiations with Canada that enabled the James Bay Crees to escape the Indian Act and achieve the first ever aboriginal self-government legislation in Canada, the Cree-Naskapi (of Québec) Act.

At the start of his political career, Grand Chief Coon Come served two terms as Chief of the Mistissini First Nation. By the time he left to work with his father on his trapline, his community had a new arena, an adult education centre, a bank, new administrative offices, new health facilities, and major improvements to its housing and community infrastructure.

Grand Chief Coon Come was Chairman of Cree Housing Corporation responsible for implementing the housing and infrastructure program. He was Chairman of the James Bay Eeyou Corporation, managing over one hundred million dollars in assets. He was also Chairman of James Bay Native Development Corporation, which under his leadership assisted in starting up fifty-four businesses within the Cree Communities. In 1995 he became a founding director of the First Nations Bank of Canada and served as a director for six years.

Grand Chief Coon Come is also a former Chairperson of Eeyou Communication Network, a project sponsored by Grand Council of the Crees for a non-profit commercialization of broadband, with a mandate to an electronic highway for the Crees to connect institutions, businesses and residents to the world of information and communications.

Grand Chief Coon Come has also had an active and successful business career, with participation in energy, mining, information technology and arts and crafts ventures.
He married Maryann Matoush in 1976, and together they have three daughters and two sons.