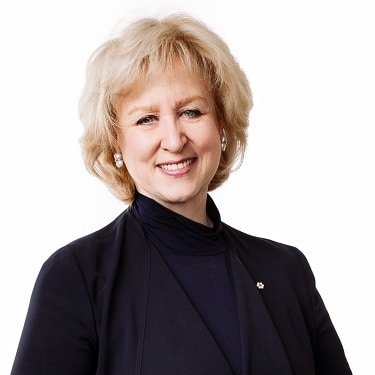 The Right Honourable Kim Campbell PC, CC, OBC, QC served as Canada’s nineteenth and first female Prime Minister in 1993. She previously held cabinet portfolios as Minister of State for Indian Affairs and Northern Development, Minister of Justice and Attorney General, and Minister of National Defence and Minister of Veterans’ Affairs. She was the first woman to hold the Justice and Defence portfolios, and the first woman to be Defence Minister of a NATO country. Ms. Campbell participated in major international meetings including the Commonwealth, NATO, the G-7 Summit, and the United Nations General Assembly.

After her tenure as Prime Minister, Campbell was a fellow at the Institute of Politics (Spring 1994) and the Joan Shorenstein Center for the Study of Press and Politics (1994-1995) at the Harvard Kennedy School of Government. She served as the Canadian Consul General in Los Angeles (1996-2000), then returned to Harvard to teach at the Center for Public Leadership at the Kennedy School (2001- 2004).

Ms. Campbell is a founding member of the Club of Madrid, an organization of former heads of government and state who work to promote democratic values. She served as Secretary General (2004- 2006). She also has served as its Acting President in 2002, its Vice President in 2003-2004, and served on its Board of Directors from 2007-2011. She served as chair of the steering committee for the World Movement for Democracy from 2008-2015.

Kim Campbell is a member and chair emerita of the Council of Women World Leaders (1999-2003). The Council’s membership consists of women who hold or have held the office of President or Prime Minister. Ms. Campbell is a member of the International Women’s Forum, a global organization of women of significant and diverse achievement. She served as its president (2003-2005) and was inducted into the IWF Hall of Fame in 2008.

Today, Ms. Campbell devotes much of her time to serving as the Founding Principal of the new Peter Lougheed Leadership College at the University of Alberta that graduated its inaugural class in June, 2017. She is also a trustee of the International Center for the Study of Radicalisation and Political Violence (ICSR) at King’s College London. In 2016, she served as Chairperson the Independent Advisory Board for Supreme Court of Canada Judicial Appointments, a role that she will reprise in the fall of 2017.

She is a member of the Pacific Council on International Policy, (the West Coast affiliate of the Council on Foreign Relations) and the Global Council of the Asia Society of New York. She is on the advisory board of Equal Voice and Apathy is Boring, as well as an honorary patron of Informed Opinions. She is also a senior advisor to the Crisis Group and an honorary board member of the Climate Action Reserve.

Ms. Campbell is a member of the board of directors for Athenex, a biopharmaceutical company that had its IPO June 14, 2017 and trades under the ticker symbol “ATNX”. Her corporate director experience also includes the high tech, bio-tech, and medical devices industries.

Throughout her political career in Canada, Kim Campbell was deeply engaged in international issues including law reform and criminal justice, international trade (her signature appears on the NAFTA side agreements) and security (both as Minister of Defence and Prime Minister; as Justice Minister she served on the War Cabinet during the First Gulf War.) Since leaving politics Ms. Campbell continues to be involved in global issues where she works with many world leaders and former heads of state and government, and her views are sought in many international fora.