Impacts of the Russian invasion of Ukraine on Human Displacement

As of March 21, 2022, media reports indicate that 10 million Ukrainians have been displaced internally, representing one-quarter of the entire population, with 3.5 million fleeing the country. These new refugees join the 83 million people worldwide forcibly displaced according to the 2020 figures published by the UNHCR. European and North American governments and populations, in particular, have responded swiftly by opening borders, reducing immigration barriers, and providing financial and logistical support, and humanitarian assistance, helping many Ukrainian refugees settle temporarily in other countries.

The Victoria Forum is organizing this webinar to examine the impacts of the Russian invasion of Ukraine on human displacement worldwide. A distinguished panel will explore the following questions:

As Leader of Northern Ireland’s Alliance Party from 1987 to 1998, he had played a significant role in the negotiation of the 1998 Belfast/Good Friday Agreement which brought peace in Ireland, and when the new Northern Ireland Assembly was elected, he became its first Speaker. He also set up the Centre for Democracy and Peace Building (http://democracyandpeace.org ) to continue the work of implementing the Good Friday Agreement and to take the lessons learnt to other communities in conflict.

He has devoted himself for many years to understanding and addressing long-standing violent political conflict including the conflicts between indigenous peoples and the descendants of colonists in various parts of the world.

Senator for Ontario, The Senate of Canada

Ratna Omidvar is an internationally recognized voice on migration, diversity and inclusion. In 2016, Ms. Omidvar was appointed to the Senate of Canada as an independent Senator representing Ontario. Senator Omidvar is the Chair of the Senate’s Social Affairs, Health and Technology Committee.

Senator Omidvar is a Director at the Samara Centre for Democracy, a Director at the Century Initiative, a Council Member at the World Refugee and Migration Council and Chair Emerita at the Toronto Region Immigrant Employment Council.

Senator Omidvar was appointed to the Order of Ontario in 2005 and became a Member of the Order of Canada in 2011, with both honours recognizing her advocacy work on behalf of immigrants and devotion to reducing inequality in Canada. In 2014, Senator Omidvar received the Cross of the Order of Merit of the Federal Republic of Germany in recognition of her contribution to the advancement of German-Canadian relations.

She is currently co-editing the 2ndedition of the Research Handbook on Disasters and International. She is a Board Member of Every Casualty Counts and a member of the UN Network on Migration.

She has prepared academic reports and published articles on the international legal obligations associated with the recording of casualties of armed conflict. 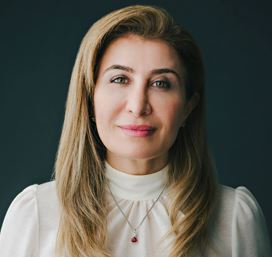 Dr. Bessma Momani is a senior fellow at the Centre for International Governance Innovation, Full Professor in the Department of Political Science and Interim Associate Vice-President of Interdisciplinary Research at the University of Waterloo. She is also a Fulbright Scholar. She was interim Assistant Vice-President, International at the University of Waterloo, Assistant Vice-President, Research and International in the Office of Research, a 2015 fellow of the Pierre Elliott Trudeau Foundation, non-resident senior fellow at the Brookings Institution and at the Stimson Center in Washington, DC, and was a visiting scholar at Georgetown University’s Mortara Center.

Bessma currently sits on the board of the Pierre Elliott Trudeau Foundation and serves as an adviser to the National Security Transparency Advisory Group at Public Safety Canada. She is currently consulting for Global Affairs Canada as a Visiting Scholar in its International Assistance Research and Knowledge Division by looking at economic security in the Middle East with a particular focus on women and youth. She sits on the Editorial Board of the Canadian Foreign Policy Journal.

Bessma has received a number of awards and prizes for her research and work. She has been awarded multiple Insight Development Grants, Insight Grants, and Connection Grants funded by Canada’s Social Sciences and Humanities Research Council. She is currently the director of a three-year-funded Department of National Defence network called the Defence and Security Foresight Group.

Register for this Webinar