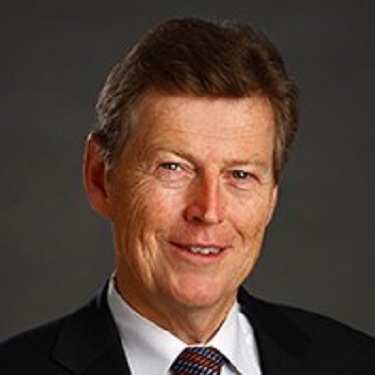 Doug Horswill retired as Senior Vice President, Sustainability and External Affairs, Teck Resources in April 2014. From August 2016 to March 2017 Doug was a member of the Expert Panel established by the Honourable Catherine McKenna to review environmental assessment in Canada.

Following 20 years in the Public Service, culminating in the positions of Deputy Minister of Finance and Corporate Relations and Deputy Minister of Energy, Mines and Petroleum Resources for the Province of British Columbia, Doug joined Cominco Ltd., later Teck Resources Ltd, as Vice President, Environment and Public Affairs in September 1992. He spent the next 22 years developing and leading Teck’s sustainability, community relations, environment, health, safety and external relations areas including Teck’s international zinc and health program.

Doug is past Chairman of the Mining Association of Canada and the Mining Association of British Columbia. He was founding Chairman of the Board of Resource Works and is Chairman of the Board of the Sunny Hill Health Care Centre for Children. Doug is a member of the Board of Directors of The International Fertilizer Development Centre (Muscle Shoals Alabama), Providence Health Care and the Canadian International Resource Development Institute. He is past Board Member of CARE Canada and the Vancouver Aquarium and Marine Research Centre. He is an Executive in Residence for the Asia Pacific Foundation of Canada.