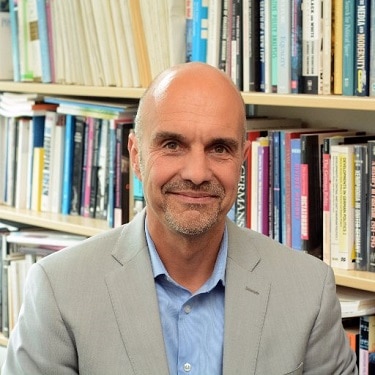 Dr. Oliver Schmidtke is acting associate vice president research at UVic with responsibility for supporting the implementation of the Strategic Research Plan and the refreshed International Plan as well as the oversight for UVic’s research centres. Dr. Schmidtke brings his international focus and record of excellence in international research to the role of AVPR, as well as his experience in leadership of the Centre for Global Studies.

He received his PhD from the European University Institute in Florence (1995) and joined the University of Victoria in 2000, first as a German Academic Exchange Service (DAAD) scholar. In 2003, he was appointed as a regular faculty and UVic European Studies Scholar in the Departments of Political Science and History. Dr. Schmidtke is also a professor in both departments and holds the European Union Jean Monnet Chair in European History and Politics.

Before joining the University of Victoria, he worked at Humboldt University in Berlin as an assistant professor (1995-98). Since then he has been a JF Kennedy Fellow at Harvard University (1998-99), a visiting scholar at Humboldt University Berlin (2002), a Fernand Braudel Senior Fellow at the European University Institute (2007), and a Marie Curie Fellow at Hamburg University (2011-12). From 2013 to 2016, he served as director of UVic’s Centre for Global Studies. Dr. Schmidtke’s research interests are in the fields of comparative European politics and contemporary history, European integration, migration and ethnic conflict, and the role of identities and collective memory in modern societies.